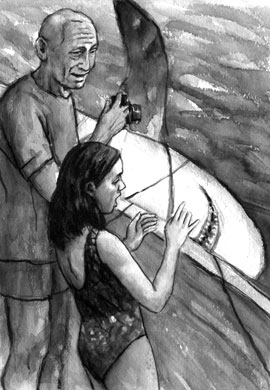 This watercolor painting as the illustration for Swimming with Sharks, a children's book written by Weig C. George, and published by HarperCollins Publishers in Summer, 1999.

Book Summary: ...Until she began to take notice of the unusual-looking fish that visited her grandparents' dock every day. When Sarah discovers she's befriended a baby lemon shark, her fascination with sharks begins. Before long, Sarah and her grandfather are inseparable as they spend hours tracking, observing, and swimming with sharks. The Florida summer heats up quickly with heart-pounding shark encounters and the daring pursuit of two shark-fin poachers. This is a shark-filled summer Sarah and her grandfather won't soon forget. Learn More about this book >