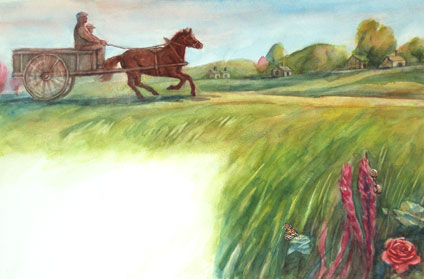 This watercolor painting as the illustration for Miz Fannie Mae's Fine New Easter Hat, a children's picture book written by Melissa Milich, published by Little, Brown and Company in 1997.

In this story there was a loving father, mother, a girl and her brothers and sisters, a beautiful easter hat with flowers and four bird eggs.

Easter is the celebration of new life

At Easter, we celebrate the earth’s new year of growth, after the cold, dark days of winter. Eastre, the goddess of spring, gave the Easter festival its name and favorite animal, the rabbit. The rabbit, or hare, represents love, fertility, and growth. Many people around the world have a day to celebrate the arrival of spring.

Easter has its beginnings in ancient Christian holidays, pagan celebrations, and spring festivals. Long before the celebration of Easter as the resurrection of Jesus Christ, people celebrated a spring festival. The sun was an important part of the celebration. Without it, there would be no life on earth. The people feasted, danced, sang, and exchanged gifts. They rejoiced over the rebirth of life in the fields and forests. Today these customs and legends combine to make our Easter Sunday.

Easter is some time between March 22 and April 25 and comes at the end of the Christian Holy Week. It may fall on the first Sunday after the first full moon following March 21 which is the first day of spring.

The Easter egg is a good example of a custom that began many thousands of years ago. For ancient peoples, the symbol of new life was an egg. When the shell was broken, a new life came into the world. Some myths state that the world itself began as an huge egg. The world-egg split in two. The upper half became the heavens and the lower half the earth. For thousands of years, it has been the custom to give eggs as gifts during the spring festival. Today we have fun dyeing them in bright colors and decorating them with simple designs.

Other customs and practices of Easter include wearing new clothes to celebrate the new year of life. In New York City and many other big cities, an important part of the holiday is the Easter Parade. People stroll in their new clothes, with many women and young girls wearing Easter bonnets, hats that have been decorated with flowers and pretty ribbons.

Flowers are popular gift at Easter, especially the Easter Lily, which also decorates the churches. Other flowers typical of Easter are the daffodil, tulip, narcissus, and pussy willows.