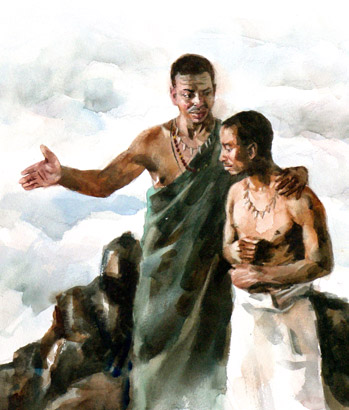 Four centuries ago, the Kikuyu now formed Kenya’s largest ethnic group. The Kikuyu people spread rapidly throughout the Central Province and Kenya. The Kikuyu usually identify their land by the surrounding mountain ranges which they call Kirinyaga-the shining mountain. The Kikuyu are Bantu and actually came into Kenya during the Bantu migration. They include some families from all the surrounding people and can be identified with the Kamba, the Meru, the Embu and the Chuka. The Kikuyu tribe was founded by a man named Gikuyu. Kikuyu history tells the Kikuyu God, Ngai, took Gikuyu to the top of Kirinyaga and told him to stay and build his home there. He was also given his wife, Mumbi. Together, Mumbi and Gikuyu had nine daughters. There was actually a tenth daughter but the Kikuyu considered it to be bad luck to say the number ten. When counting they used to say full-nine instead of ten. It was from the nine daughters that the nine – occaisionally a tenth – Kikuyu clans: Achera, Agachiku, Airimu, Ambui, Angare, Anjiru, Angui, Aithaga, and Aitherandu were formed.

The Kikuyu rely on agriculture. They grow bananas, sugarcane, arum lily, yams, beans, millet, maize, black beans and a variety of other vegetables. They also raise cattle, sheep, and goats. They use the hides from the cattle to make bedding, sandals, and carrying straps and they raise the goats and sheep to use for religious sacrifices and purification. In the Kikuyu culture boys and girls are raised very differently. The girls are raised to work in the farm and the boys usually work with the animals. The girls also have the responsibility of taking care of a baby brother or sister and also helping the mother out with household chores. In the Kikuyu culture family identity is carried on by naming the first boy after the father’s father and the second after the mother’s father. The same goes for the girls; the first is named after the father’s mother and the second after the mother’s mother. Following children are named after the brothers and sisters of the grandparents, starting with the oldest and working to the youngest. Along with the naming of the children was the belief that the deceased grandparent’s spirit, that the child was named after, would come in to the new child. This belief was lost with the increase in life-span because generally the grandparents are now still alive when the children are born.

Though they are traditionally agricultural people and have a reputation as hard-working people, a lot of them are now involved in business. Most of the Kikuyu still live on small family plots but many of them have also seen the opportunities in business and have moved to cities and different areas to work. They have a desire for knowledge and it is believed that all children should receive a full education. They have a terrific reputation for money management and it is common for them to have many enterprises at one time. The Kikuyu have also been active politically. The first president of Kenya, Jomo Kenyatta, was actually a Kikuyu. Kenyatta was a major figure in Kenya's fight for independence.