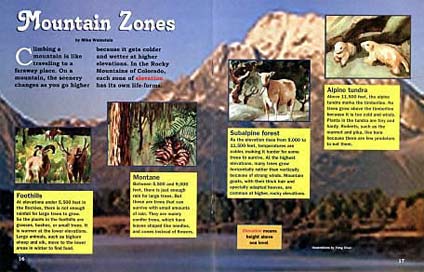 This watercolor painting as the illustration for Appleseeds, a children's magazine located in Peabody, New Hampshire.

Potential climate change impacts
If greenhouse gas concentrations keep rising, climatic changes are likely to result. Those changes will potentially have wide-ranging effects on the environment and socio-economic sectors.

The six IPCC scenarios
The projection of future climate change depends partly on the assumptions made about future emissions of greenhouse gases and aerosol precursors and the proportion of emissions remaining in the atmosphere.

Projected changes in CO2 and climate: summary of assumptions in the IPCC 1992 alternative scenarios
Projected anthropogenic CO2 emissions from fossil fuel use, deforestation and cement production for the six IPCC emission scenarios.

Projected Changes in Global Temperature
Climate models calculate that the global mean surface temperature could rise by about 1 to 4.5 centigrade by 2100.

Scenarios of sea level rise
Models project an increase in global mean sea level of between 13 and 94 cm by the year 2100.

The great weather and flood catastrophes over the last forty years
Some reports suggest that increase in climate variability or extremes has taken place in recent decades.

Thinning of the Arctic sea-ice
Ice draft in the 1990s is more than a meter thinner than it was 20 to 40 years earlier.

Evolution of the ice-breaking date in the River Torino (Finland)
Winter ice on the Tornio River in Finland has broken up earlier and earlier since records began in 1693.

Changes in permafrost temperatures at various depths in Fairbanks (Alaska)
Widespread loss of discontinous permafrost will trigger erosion or subsidence of ice-rich landscapes, change hydrologic processes, and release CO2 and methane to the atmosphere.

Great ocean conveyor belt
The global conveyor belt thermohaline circulation is driven primarily by the formation and sinking of deep water (from around 1500m to the Antarctic bottom water overlying the bottom of the ocean) in the Norwegian Sea.

Potential impact of sea-level rise on Bangladesh
Bangladesh, one of the world's poorest nations is also the country most vulnerable to sea-level rise.

Potential impact of sea level rise: Nile Delta (today)
The Nile Delta is one of the oldest intensely cultivated areas on earth. It is very heavily populated, with population densities up to 1600 inhabitants per square kilometer. The low lying, fertile floodplains are surrounded by deserts. Only 2,5% of Egypt's land area, the Nile delta and the Nile valley, is suitable for intensive agriculture. Most of a 50 km wide land strip along the coast is less than 2 m above sea-level and is protected from flooding by a 1 to 10 km wide coastal sand belt only, shaped by discharge of the Rosetta and Damietta branches of the Nile. Erosion of the protective sand belt is a serious problem and has accelerated since the construction of the Aswan dam.

Potential impact of sea level rise: Nile Delta (0.5 to 1.0 metres)
Rising sea level would destroy weak parts of the sand belt, which is essential for the protection of lagoons and the low-lying reclaimed lands. The impacts would be very serious: One third of Egypt's fish catches are made in the lagoons. Sea level rise would change the water quality and affect most fresh water fish. Valuable agricultural land would be innundated.

Impact of temperature rise on robusta coffee in Uganda
In Uganda, the total area suitable for growing Robusta coffee would be dramatically reduced with a temperature increase of 2 centigrades.

Freshwater stress
Even if the world maintained the pace of the 1990s in water supply development, it would not be enough to ensure that everyone had access to safe drinkning water by 2025.

Population and freshwater stress
One study suggests that although global water conditions may worsen by 2025 due to population pressure, climate change could have a net positive impact on global water resources.

Spread of major tropical vector-borne diseases
Climate change and altered weather patters would affect the range (both altitude and latitude), intensity, and seasonality of many vector-borne and other infectioius diseases.

Malaria.
Plasmodium vivax, with the Anopheles mosquito as a vector, is an organism causing malaria. The main climate factors that have bearing on the malarial transmission potential of the mosquito population are temperature and precipitation.