An Artist Then and Now 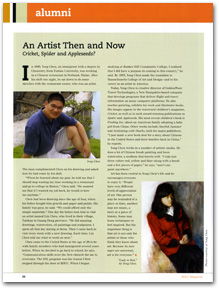 In 1990, Yong Chen, an immigrant with a degree in Chemistry from Foshan University, was working in a Chinese restaurant in Portland, Maine. After his shift one night, he sat down to do some sketches with the restaurant owner, who was an artist. The man complimented Chen on his drawing and asked how he had come by his skill.

"When he learned about my past, he told me that I should stop wasting my time working in a restaurant and go to college in Boston," Chen said. "He assured me that if I wanted my job back, he would re-hire me anytime."

Chen had been drawing since the age of four, when his father bought him pencils and paper and paints. His family was poor, he said. "We could afford only the simple materials." One day his father took him to visit an artist named Lin Chen, who lived in their village, Taishan in Guang Dong province. "He did amazing drawings, watercolors, oil paintings and sculptures. I spent all that day staring at them. Then I came back to visit every week with a new drawing. Each time, Lin Chen told me what to work on next."

Chen came to the United States at the age of 26 to be with family members who had immigrated several years before. When he decided to go back to school, he says, "Communication skills were the first obstacle for me to overcome. The ESL program was the reason I first stepped through the door at BHCC. When I began studying at Bunker Hill Community College, I realized that I did have a purpose in coming to this country," he said. By 1993, Yong Chen made the transition to Massachusetts College of Art and Design–and to his career as an artist in America.

Today, Yong Chen is creative director of GoldenWare Travel Technologies, a New Hampshire-based company that develops programs that deliver flight and travel information on many computer platforms. He also teaches painting, exhibits his work and illustrates books. His images appear in the renowned children's magazine, Cricket, as well as in such award-winning publications as Spider and Appleseeds. His most recent children's book is Finding Joy, about an American family adopting a baby girl from China. Other works include Starfish Summer and Swimming with Sharks (also Miz Fannie Mae's Fine New Easter Hat), all for major publishers. "I just made a new book deal for a story about Chinese in the United States and their families back in China," he reports.

Yong Chen works in a number of artistic media. He does a lot of Chinese brush painting and loves watercolor, a medium that travels well. "I take just three colors-red, yellow and blue-along with a brush and a few pieces of paper," he says, "and I can paint anywhere."

Art has been central to Yang Chen's life and he encourages everyone to enjoy it. "People have very different levels of appreciation of art. One person may be reminded of a place or time, another may see music, a story or a piece of history. Some may learn techniques or feel inspired. But the important thing is that art is not only for artists or those who think they know about art. Because its messages are universal, art is for everyone."