Yong Chen exhibited a new body of oil paintings at Bannister Gallery in the month of December 2012. Through those new paintings, Yong explored his immigrant experience in America with his own personal journey. With skillful craftsmanship, compositions that evoke a sensitivity to a type of narrative portraiture. His highly detailed renderings of other immigrants have striking references to cultural experience steeped in Western art, yet contain Chinese art-making practice at its core. See more details of this exhibit. Note: some of the paintings in this art show have been collected by some healthcare institutions.

Make your own luck: A Chinese New Year's tale of following your dreams to find the perfect career

[February 18, 2010, by Heidi Masek, Hippo]
Although Yong Chen illustrated other children’s books, A Gift is the first the Nashua artist also wrote.

In A Gift, family members in China create a Chinese New Year’s gift to send to their young niece, Amy, in the U.S. It’s the kind of book a family not unlike Chen’s might use to explain customs surrounding the New Year — which this year was Sunday, Feb. 14 — to generations raised in America. For Chen, the book is part of the larger story of the direction of his life, a direction he might not have foreseen while teaching chemistry in China or working in a Chinatown grocery store in Boston unable to speak English.

Now he works at a job that offers him new challenges and encourages his creative growth; his own story about his own culture was published, and he shares the joy of art through teaching. But getting to this point in his life at which he feels really happy in his career took Chen, who will be 47 in April, several tries. continued >

Exhibit 2009 in the Nashua Public Library

Exhibit in the Boston Logan to international audience

As a member of the International Artists Group, Yong's watercolor paintings is exhibiting in the busy Boston Logan International Airport terminal to international audience. This exhibit will last for 2 months from November 2009.

Many good things had happened in the summer of 2009. First, Yong finished his study in the University of Hartford, CT and earned his MFA in Illustration. Then he took a trip to China – Yong's home country to meet with his hometown media and friends. He accepted the interviews with a TV network, a dairy newspaper, and a radio show (produced for Los Angeles AM radio station KMRB 1430, about him and his newest children's book... Click here to read all these news>

July of 2009, and after 2 years of concentrated study in Hartford Art School which part of University of Hartford in CT, Yong received his highest academic degree in illustration, the Master of Fine Arts. In these two years, Yong met some of the best artists and educators in the country, and he finally finish writing his first children's book A Gift and published by Boyds Mills Press in September 2009.

An exhibit of Yong Chen’s recent watercolor paintings, Through the Eyes of Yong Chen, can be seen at the Nashua Public Library, Media Level Image Gallery, 2 Court Street, Nashua, New Hampshire 03060. From January 1, 2008 to February 29, 2008.

Artist Yong Chen has been on BHCC Magazine

Yong was interviewed by BHCC Magazine, and appeared on their issue of January 2008
Chen came to the United States at the age of 26 to be with family members who had immigrated several years before. When he decided to go back to school, he says, "Communication skills were the first obstacle for me to overcome. The ESL program was the reason I first stepped through the door at BHCC. When I began studying at Bunker Hill Community College, I realized that I did have a purpose in coming to this country," ...(BHCC Magazine) Read article>

Illustrating this picture book has been an adventure for me, requiring a trip to China to trace the steps of the story. Come to learn more or see the watercolor illustrations.

The Prints of Watercolor

An exhibit of the prints of Yong Chen’s recent watercolor paintings, can be seen now at the Borders Bookstore in south Nashua, 281 Daniel Webster Highway, Nashua, NH 03060. Call for driving directions: 603.888.9300. The exhibit lasted until the end of March, 2005. 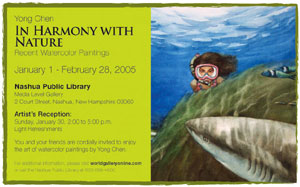 In Harmony with Nature

This exhibit includes most of the paintings we have listed on this web site, plus work from private collections. Please come and bring your friends!

Watercolor Show-and-tell to the Children of Nashua

Yong Chen is offering a Show and Tell with his watercolor painting and demonstrations to the children of Nashua. Yong will demonstrate watercolor fun techniques and share his experience how he grew as an artist. The demonstration will be held at the Nashua Public Library Image Gallery where his paintings currently display, in the evening of February 28 (Monday), start from 2 P.M. It is free to the public, children and adults.