Portrait of An Artist 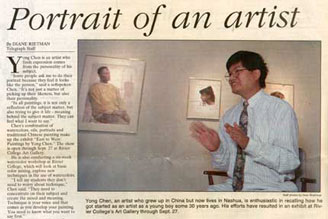 Sunday Telegraph, An interview by Diane Rietman, a staff reporter of Telegraph.

Yong Chen is an artist who finds expression comes from the personality of his subject. "Some people ask me to do their portrait because they feel it looks like the person," said a softspoken Chen. "It's not just a matter of picking up their likeness, but also their personality.

Chen's combination of watercolors, oils, portraits and traditional Chinese painting make up the exhibit "East to West: Paintings by Yong Chen." The show is open through Sept. 27 at Rivier College Art Gallery.

He is also conducting a six-week watercolor workshop at Rivier College, which will look at basic color mixing, explore new techniques in the use of watercolors.

"I tell my students they don't need to worry about technique," Chen said. "They need to concentrate on their subject and create the mood and meaning. Technique is your voice and that comes as you develop your painting. You need to know what you want to say first."

Chen is a native of the small community of Taishan in a southern province of China, Now a resident of Nashua ... Since he was 4, Chen loved to draw and paint. Although his family was very poor, Chen's father would spend the equivalent of his entire day's pay to buy paper, colors and brushes for the young artist. As a child, Chen would spend hours in his bedroom painting and drawing. By time he was 10 years old, he was famous in his hometown because of the honors he received for his work.

"Anytime I would finish a painting, he was very happy," Chen said of his father. "I continue to paint because I want my parents to be happy. It brings much joy for me."

His love of teaching also developed when he was young. At the age of 13 he started teaching friends.

"I'd always have people around me since I was a little boy and would teach like that," Chen said.

As he was about to enter college, he was directed to study chemistry.

"I went to the art teacher and begged him to talk to professors, but he told me he would not take me as a student," Chen said. "As a student I did well in the sciences and they controlled what I did. I cried at this point."

Although his career choice had been chosen for him. He still found a way to pursue painting. He started a student fine arts society, obtained the support of his school which provided him with a studio and some of his materials.

His first job was teaching chemistry and fine arts in a high school.

After members of his family immigrated to the United States, his parents encouraged Chen to join them. It wasn't easy at first.

"I couldn't teach because of my English. I worked as a cook in a restaurant in Portland, Maine, and needed to study English," Chen said of his arrival in the United States in 1989. "I went to Boston and took English as a Second Language classes at Bunker Hill Community College. When I looked at programs to study, my brother suggested that I study pharmacy because I already had the chemistry background."

Chen's heart wasn't in furthering his career in science. His advisor, Betsy Marieie recognized his sense of art and entered Chen's work in an art show. Winning the first -- and second-place awards gave him the confidence to pursue art through a program in graphic design.

"She felt that I'd been painting for my whole life and I shouldn't stop," Chen said.

After obtaining his associate's degree, he received his bachelor of fine arts in illustration from the Massachusetts College of Art in Boston. For a class project, he went to the Massachusetts Statehouse, where he did 20 portraits of state elected officials, many of which now hang in the Statehouse or art part of his collection.

Another class project was to illustrate a book. Using "Christy's Wedding," a book written by Marieie, he researched African wedding ceremonies, looked at videos, did sketches and watercolor paintings to illustrate the book.

The entire project was completed in less than two months between research, drawings and the paintings.

His work caught the attention of an art director at the book publisher, Little, Brown and Co., who called him in for an interview to illustrate a children's book. The book with Chen's illustrations, goes to print at end of this year.

His show at Rivier College is the result of a successful one-man show in Boston. He hoped to bring the show closer to home so his co-workers could see the show. When he approached Rivier officials, he not only got space for his show, but was asked to conduct a watercolor workshop.

"I knew when I was working in a research lab that chemistry was not my true life," Chen said. "I never wanted to study the sciences. Here I can choose what I like. This country has given me a new freedom. It's why I feel so good about this country.