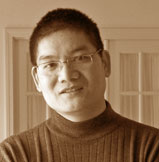 Yong Chen hails from Taishan, a town in the Guangdong province of China. Yong began drawing and painting at the age of four.

Before Yong came to the United States, he was a high school art and science teacher for five years. After immigrating to the United States in 1989, Yong studied Graphic Design and Illustration in Boston, and earned his Master of Fine Arts from the University of Hartford, CT.

Since 1995, he has illustrated/authored many children’s books and children’s magazines. Publishers of his work include: Little Brown and Company, HarperCollins, Boyds Mills Press, Spider, Cricket, and AppleSeeds.

"Painting is my life-long passion. Painting is a means for me to express the emotions I find in the relationships of people and nature."

February 18, 2010
In A Gift, family members in China create a Chinese New Year’s gift to send to their young niece, Amy, in the U.S. It’s the kind of book a family not unlike Chen’s might use to explain customs surrounding the New Year — which this year was Sunday, Feb. 14 — to generations raised in America. For Chen, the book is part of the larger story of the direction of his life, a direction he might not have foreseen while teaching chemistry in China or working in a Chinatown grocery store in Boston unable to speak English... Read article>

February 7, 2010
A story written by Sarah Earle for both Concord Monitor and Nashua TelegraphNashua artist Yong Chen. Story entitled as "City author's 'Gift' offers good lesson": ... With varying degrees of sincerity, many of us grown-ups will tell our significant others we don’t need presents for Valentine’s Day next week. Money can’t buy love, and all I need is you and blah, blah, blah (but my ring finger is a size 5, just in case you were wondering). Our children engage in no such games. They want gifts, darn it, and they aren’t afraid to say so.... Read article>

February 7, 2010
A book review by Sarah Earle for both Concord Monitor and Nashua TelegraphNashua artist Yong Chen expertly captures that beauty in a book titled just that, A Gift. The sparely written, lavishly illustrated book, published last September, tells the story of a young Chinese-American girl who receives a package from her relatives living on the other side of the world, in rural China. It's set during Chinese New Year, which this year happens to fall on Valentines Day... Read article>

The summer of 2009 on Chinese Television Interview
A trip to China, Yong's home country to meet with his hometown media and friends. He accepted the interviews with a TV network, a dairy newspaper, and a radio show about him and his newest children's book... Click here to watch the feature television interview >

During the visit in China in the summer of 2009, Yong was interviewed by a major Chinese newspaper "Jiangman Daily Newspaper" about the artist life since his arrival to the United States, and how he reinvented his newartistic career as a college professor, autor, illustrator and professional artist. This feature storywas entitled as "Let the world know the real Chinese culture"... Click here to read about it > Many more articles and related news on radio and college visits about Yong and his children's books are available, click here to read.

January, 2008
Chen came to the United States at the age of 26 to be with family members who had immigrated several years before. When he decided to go back to school, he says, "Communication skills were the first obstacle for me to overcome. The ESL program was the reason I first stepped through the door at BHCC. When I began studying at Bunker Hill Community College, I realized that I did have a purpose in coming to this country," he said. By 1993, Yong Chen made the transition to Massachusetts College of Art–and to his career as an artist in America.(BHCC Magazine) Read article>

March 1, 2005
The watercolors of Yong Chen are on display in the Image Gallery at the Nashua Public Library during January and February. Yong Chen is a graphic designer and illustrator who lives in Nashua and grew up in China. He has been drawing and painting since the age of four. As a young adult, he explored different forms of art, as a violinist, songwriter, and poet.(Sunday Telegraph) Read article>

February 30, 2005
An interview conducted in the Nashua Public Library Image Gallery, during my exhibit of my watercolor paintings. The article called "Overcoming the barriers in a new world"...Chen grew up in a village in southern China that was rich in culture and tradition. At a young age, he grew to love music and art. But Chen went off to study, and when he graduated from Foshan University, he had a degree in chemistry. Read article>

February 3, 2005
The Internet has changed the way people do a lot of things, but you’d think visiting an art gallery wouldn’t be one of them. People who buy art usually do so because they fall in love with a piece. It moves them or speaks to them, or would look really great above the mantle. World Gallery provides the tools to get an artist up an running without having to have any of the knowledge necessary to do so... New Cyber-gallery Open (Hippo Nashua) Read article>

February 15, 1996
A phone interview after my one-person watercolor painting exhibit in the Bunker Hill Art Gallery. Life has never been easy for an artist. Since ancient times, painters have been isolated, unrecognized and then only after death, given some credit. Times, however, have changed and Yong Q. Chen, who is currently exhibiting his art work at the Bunker Hill Gallery, shows us that...In 1989, maybe still in search for himself, Yong immigrated to the US Life wasn't easy in the states. He had to work in a Chinese restaurant and in other area he wasn't really interested in. "It was then that I felt strongly the need to learn English," said Yong. In 1990 Yong enrolled in the ESL program at Bunker Hill. Here, he met Betsy Mariere... Read article>

April 1995
There was Spring of 1995 when I was a senior of illustration in Massachusetts College of Art. I was selected to participate in the Art to the State House project. Each morning I packed a simple set of watercolor materials and tools, I was scheduled with the Senators and house representatives along with other artists... On the TV WBZ News when I was doing portraits in the Massachusetts State House Spring 1995. View this partial movie clip from Boston WBZ News station >

Children's magazine "Spider" - Get Off My Lap, Cat
Written by Trinka Enell, 1998

Children's magazine "Spider" - The Mat and the Meal
Written by Virginia Kroll, 1999