The Art of Perseverance 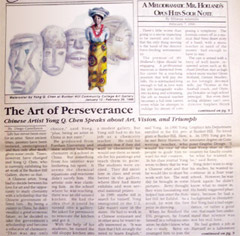 The Third Rail, February 15, 1996.
An interview by Diego Castellanos, a staff reporter

Life has never been easy for an artist. Since ancient times, painters have been isolated, unrecognized and then only after death, given some credit. Times, however, have changed and Yong Q. Chen, who is currently exhibiting his art work at the Bunker Hill Gallery, shows us that.

A Chinese artist, Yong had to decide between his love for art and the opportunity to study chemistry with a scholarship that the Chinese government offered him. By being a painter in China, he didn't visualize a good economic future, so he decided to take the government's scholarship and become a educator of chemistry. "That was my only choice," said Yong, "plus, being an artist in China is not easy."

He graduated from Forshan University and then started teaching chemistry in a school in China. But something from his interior was bothering his spirit. It seems the chemical equations and reactions didn't satisfy him. His artistic side was claiming him. In the school where he was teaching, there was an old unused kitchen. He had the idea that it could be turned into a gallery. He asked for permission to renovate the kitchen and got it.

With the help of his students, he turned the old sloppy kitchen into a modest gallery. But Yong still had to do his job as a chemistry teacher. He told his students that if they did well in chemistry, he would use them as models for his paintings and teach them to paint. The students were excited. They did excellent in calls and even better in the gallery, where they had many exhibits and won several national prizes.

In 1989, maybe still in search for himself, Yong immigrated to the US Life wasn't easy in the states. He had to work in a Chinese restaurant and in other area he wasn't really interested in. "It was then that I felt strongly the need to learn English," said Yong. In 1990 Yong enrolled in the ESL program at Bunker Hill. Here, he met Betsy Mariere, his writing teacher, who would be one of the people to guide him toward his real vocation.

In his class journal Yong wrote to Betsy that he was a Chinese artist and that he would like to share his work with her. The next day he brought in some pictures. Betsy thought they were fascinating and helped him enter the Bane Hill Art Exhibit. As a result, he won the first prize in drawing and second prize in watercolor.

When he finished the ESL program, he found himself in a nebulous situation: he didn't know what else to study. Betsy encouraged him to join the Graphics Arts Department at Bunker Hill. He loved it. In 1993 Yong got his associates degree on Computer Graphic Design. "I told Yong that in this country he finally could be what he wanted to be," said Betsy.

Yong didn't want to stop his studies, he wanted to continue in a four year school. However, he was blank again: he didn't know what to major in. His family suggested pharmacy, because he had a background in chemistry. But Yong had a bad experience, or cater a good one, that made him understand that science was not his real love.

He had gotten a job a Harvard as a Laboratory Assistant, but after that, "I found out that I should not study any sciences; I didn't like them any more," said Yong. A teacher made him see that he could make his natural skills (drawing and painting) a profession. He went to Mass College of Art and studied illustration. He graduated last spring and is currently working as an illustrator at PennWell Publishers in New Hampshire.

Yong's watercolors are full of peace and feeling. They are undoubtedly a reflection of his personality. "Yong is a very peaceful and thoughtful man," said his teacher and friend Betsy.

Ninety-nine of his pictures are portraits of people from different cultures. He has illustrated a set of six pictures for two books that Betsy Mariere wrote, but haven't been published yet. Two pictures, which are titled "Encounter with Just in Case" show Yong's wife holding Betsy's baby (the infant is Yong's Chinese interpretation of what the baby would look like). the pictures illustrate Betsy's book "Bed Time for Adults and Illustrated Reader" which talks about being a young adult and the challenges of parenthood. The other four pictures make part of a children's book narrated by a 12-year-old. They show a Nigerian wedding, with all the magic and mysticism of the ceremony.

Yong classifies his work as Impressionist-Realistic, because of the beauty of the color and the realism of the subject. "When I do a portrait," said Yong, "I try to draw not only the model, but his personality as well."

Yong's goal was to have a one-man-show in Bunker Hill, and it came true. Now his goal is to return to Bunker Hill to teach drawing and painting. Undoubtedly, he will make it.