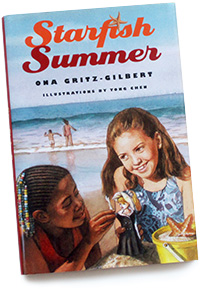 A young girl learns how to be more independent from her mother during a summer at the beach.

Publishers Weekly
Gritz-Gilbert's quiet, languidly paced first novel takes place in a small beach community, where New Yorker Amy spends the summer with her great-aunt Jenny, who makes dolls from socks and smells "like tangerines and yellowed books." Though Amy is determined to shake her "Mama's girl" image and make new friends, she's homesick for her overprotective mother and greatly misses "not just the feel of Mom's hugs but their smell, like a loaf of oatmeal bread baking." Crystal, the girl next door who feels abandoned by her most recent close friend, exacerbates matters when she rebuffs Amy's attempts to get to know her, remaining "as sharp and cold as the salt water when you first step in." Amy's relationship with a kind, elderly blind man who shows remarkable insight into Amy's feelings provides some warm moments in the narrative. Yet the standoff between the girls grows tiresome, as does the author's heavy-handed, often flowery similes and imagery (e.g., Crystal's voice "made Amy think of lacy, old fashioned dresses"). Even the most poetic-minded young readers may find this tale a bit old-fashioned. Ages 7-10. (June)

Children's Literature
Young Amy is having trouble adjusting to a summer away from her mother. She is visiting her Great Aunt Jenny at the beach. Besides missing her mother, Amy is disappointed when her efforts at making friends with a neighbor girl are rebuffed. Luckily the other, mostly elderly, neighbors are kind and one of them, blind Mr. Fine, is especially understanding and supportive. This low-key, realistic story would be a good choice for beginning chapter book readers.

School Library Journal
Gr 3-5-While Amy's mother is away, the child stays at the beach with her Great-Aunt Jenny. During the summer she hopes to overcome her "Mama's girl" image and become more independent. Crystal, the only other girl her age in the neighborhood, snubs her and Amy soon becomes frustrated. The elderly people in the community witness this, but only blind Mr. Fine understands the problem. He tells Amy that Crystal was hurt when a friend she made last summer did not keep in touch after she left. He also helps Amy deal with her own homesickness by telling her about starfish and their "magical" ability to grow back a lost arm, explaining that the space left in her heart by missing someone can be filled once again. When Amy describes this analogy to Crystal, she reaches out and helps Amy learn to ride a bike. The characters tend to be one dimensional and the story has no surprises. Black-and-white pencil drawings appear throughout. The theme of understanding others from their point of view and finding one's place is better dealt with in Patricia MacLachlan's Arthur, for the Very First Time (Harper, 1980), but Gritz-Gilbert's book is easier reading and will appeal to fans of seashore stories.-Marlene Gawron, Orange County Library, Orlando, FL

Kirkus Reviews
Amy's painful separation from her mother is soothed by a budding friendship with Crystal and her brother Raymond in this idealized story of one girl's summer. Amy has always been a "mama's girl" who misses her mother terribly, a starfish missing an arm. During her summer stay at the beach with sock-doll fanatic Great-aunt Jenny, Amy is determined to be brave, to deal with her homesickness, and to try to make new friends. Crystal, who lives next door, snubs her every effort, belittling her for not knowing how to ride a bike, and for knowing sidewalk games from the city, instead of beach games, such as tickle bottom and poke the jelly. Only blind old Mr. Fine, who stands out among a cast of overly agreeable adults, really understands Amy. When Amy enlists Crystal and Raymond to help her steal socks from the line to cure her great-aunt's "sock doll block," she lands them in trouble. This tame sequence of events, glimpsed in realistic black-and-white illustrations, is brought to a candy-coated close when Amy rides a bike without training wheels. It's unfortunate that Amy's independence and bravery comes only to gain Crystal's approval; the greater problem is that in presenting an interracial friendship (Crystal and Raymond are African-American), the author smooths over personalities to the point of blandness. (Fiction. 7-10)