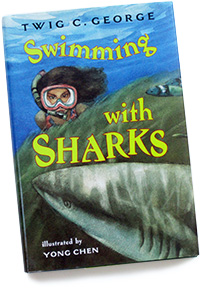 No TV, no friends, and a grandfather struggling with retirement from marine biology—Sarah's sure her stay in the Florida Keys will be the most boring summer of her life.

That is, until she begins to take notice of the unusual-looking fish that visits her grandparents' dock every day. When Sarah discovers she's befriended a baby lemon shark, her fascination with sharks fakes roof. Before long, Sarah and her grandfather are inseparable as they spend hours tracking, observing, and swimming with sharks.

Author Biography: Twig C. George was inspired to write Swimming with Sharks after she spent time studying and swimming with sharks in the Bahamas. She is also the author of A Dolphin Named Bob, illustrated by Christine Herman Merrill. She lives in Maryland.

While spending the summer in the Florida Keys with her grandfather, a retired marine biologist, ten-year-old Sarah has the opportunity to observe a variety of sharks and their behavior.

School Library Journal
Grade 3-6-Ten-year-old Sarah Marshall expects to be totally bored by spending the summer with her grandparents in the Florida Keys until she discovers a baby lemon shark with the other fish she feeds from the dock every day. Using her snorkel, she follows it to its nursery in the shelter of a mangrove swamp. Her interest leads her grandfather, a retired marine biologist, to take her to see sharks in deeper waters. Eventually, she joins him in swimming with grown sharks and tracking them. Together, they pursue fishermen who are illegally capturing and killing sharks to remove their fins, which are highly prized for soup. The message is unmistakable, but youngsters will be so captivated by the snorkeling adventures that they are unlikely to mind the increasingly didactic tone of the book or the wooden characters. Although some of the scenes are a bit unrealistic, the author presents a great deal of information about shark behavior, varieties, and habitats that dispels popular stereotypes. Simple black-and-white illustrations help readers visualize Sarah's activities as well as the underwater life she so admires. A list of groups to contact for further information about these fish and places to see them are appended.-Kathleen Isaacs, Edmund Burke School, Washington, DC Copyright 1999 Cahners Business Information.